UPDATE: Thank you to everyone who watched us last night! If you missed our panel you can still catch it on YouTube here.

Eliza Victoria (Philippines) – Eliza Victoria is the author of several books including the Philippine National Book Award-winning Dwellers (2014), the novel Wounded Little Gods (2016), the graphic novel After Lambana (2016, a collaboration with Mervin Malonzo), and the science fiction novel-in-stories, Nightfall (2018). Her fiction and poetry have appeared in several online and print publications, most recently in LONTAR: The Journal of Southeast Asian Speculative Fiction, The Best Asian Speculative Fiction, The Apex Book of World SF Volume 5, and Future SF Digest. Her work has won prizes in the Philippines’ top literary awards, including the Carlos Palanca Memorial Awards for Literature. Her one-act plays (written in Filipino) have been staged at the Virgin LabFest at the Cultural Center of the Philippines.

Isabel Yap (Philippines) – Isabel Yap writes fiction and poetry, works in the tech industry, and drinks tea. Born and raised in Manila, she has also lived in California and London. She holds a BS in Marketing from Santa Clara University, and an MBA from Harvard Business School. In 2013 she attended the Clarion Writers Workshop, and since 2016 has served as Secretary for the Clarion Foundation. Her work has appeared in venues including Tor.com, Lightspeed, Strange Horizons, and Year’s Best Weird Fiction. Herdebut short story collection will be published by Small Beer Press in 2021. She is@visyap on Twitter and her website ishttps://isabelyap.com.

Vida Cruz (Philippines) – Vida Cruz’s fiction has been published or is forthcoming from Strange Horizons, PodCastle, Expanded Horizons, and various anthologies, as well as been longlisted for the British Science Fiction Award. A Clarion graduate and a Tiptree/Otherwise Fellow, she is also a book editor with The Darling Axe.

She lives in Manila with her family and 10 memeable dogs.

Victor Fernando R. Ocampo (Singapore/Philippines) – Victor Fernando R. Ocampo is the author of the International Rubery Book Award shortlisted The Infinite Library and Other Stories (Math Paper Press, 2017) and Here be Dragons (Canvas Press, 2015), which won the Romeo Forbes Children’s Story Award in 2012. His play-by-email interactive fiction piece “The Book of Red Shadows” debuted at the Singapore Writers Festival in 2020.

He is a fellow at the Milford Science Fiction Writers’ Conference (UK) and a Jalan Besar writer-in-residence at Sing Lit Station (2020/2021).

FIYAHCON is a virtual convention centering the perspectives and celebrating the contributions of BIPOC in speculative fiction. Hosted by FIYAH Literary Magazine. The inaugural event will take place on October 17-18, 2020 and will host a variety of entertaining and educational content surrounding the business, craft, and community of speculative literature.

Where the magazine is focused specifically on the elevation of Black voices in short speculative fiction, FIYAHCON seeks to center the perspectives and experiences of BIPOC (Black, Indigenous, and People of Color).

Thank you to FIYACON, Vida Cruz and Iora Kusano for inviting me to be both a panelist and a moderator. Join us! All the Fringe events are free! You can find my schedule below:

To many writers, the inner workings of magazines are utterly opaque. Our panel of editors can give you insight into what things look like on their side of the desk: financial legal considerations, unexpected challenges, how to best promote authors’ work. This panel is great for any author who wants to see how a magazine is made, especially if they’re considering starting a magazine of their own!

It’s the eternal struggle: why do we italicize takoyaki but not taco? What counts as a loanword? Do italics highlight distinctive aspects of cultures settings, or do they exoticize it? Should we italicize anything at all? Panelists will share how they approach this problem within their own work, including how to discuss it with editors agents.

It’s really sad to see LONTAR go. There really isn’t any publication of it’s scope and breadth focused exclusively on Southeast Asia anywhere in the world.

It’s tenth and final issue is double-sized wonder featuring work by Dean Alfar, Vida Cruz, Drewscape,  Joses Ho, Patricia Karuningan, Gabriela Lee, Manish Melwani, Wayne Ree, Lakan Umali, Eliza Victoria, Topaz Winters, Cyril Wong, Kevin Martens Wong, and many others. Founding Editor Jason Erik Lundberg wanted to include the artwork made by award-winning artist Sonny Liew for the my book The Infinite Library and Other Stories.  I wrote a flash fiction piece called “To See Infinity In The Pages Of A Book” to accompany it.

Let’s hope it won’t be too long before another publication picks up LONTAR’s legacy.

Not quite the best pictures, but it was great to see old and new writer friends in Manila – Dean Alfar, Vida Cruz and Mia SN. Interestingly, Vida and I were in the TOC for Philippine Science Fiction Vol. 9, which was founded by Dean and his better half, Nikki. Mia is a very talented young artist/writer based in Australia. 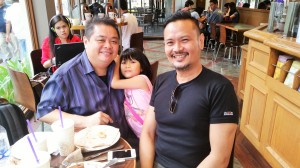 Me, Sophia, Mia, Vida and Seb at Wooden Spoon