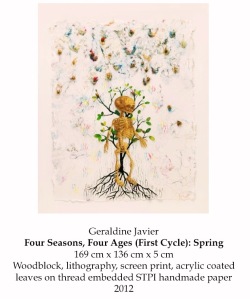 The quadtych Four Seasons, Four Ages (2012) is a series of mixed media works on coloured and shaped handmade paper that incorporate woodblock, lithograph and screen printing, as well as acrylic coated leaves and flocked thread. They were produced for the exhibit Playing God in an Art Lab (July 2012) which collected the results of Geraldine Javier’s four-week residency at the Singapore Tyler Print Institute.

Each of the four individual works — Spring, Summer, Autumn and Winter, feature a male skeleton and a tree, each at an analogous phase of “growth”. Spring (First Cycle) shows a toddler’s skeleton with a crown-less sapling growing about it. Summer (Second Cycle) is a skeleton in young adulthood with a tree surrounded by leafy “butterflies”, perhaps signifying that the skeleton, like the tree it stands against, is in the full flower of youth. Autumn (Third Cycle) sees a fully grown, possibly middle-aged skeleton suspended or sitting on a tree which has a dense crown of leaves. Winter (Fourth Cycle) shows the bare branches of a tree in the gloom of the year’s final season. Beneath it sleeps a pile of bones, alluding perhaps to the destructive force of old age. Collectively the four works dramatize how Death and Life are inextricably linked in a circle reminiscent of the Mannerist Giuseppe Arcimboldo’s Four Seasons (1563, 1573). Javier suggests, perhaps, that Death and Life find ultimate meaning in each other.

Nothing about Javier’s work is ever simple. She and her oeuvre have always been a mystery wrapped in enigma. Four Seasons, Four Ages at first glance seem to be simple Memento Mori, meant to remind one of the fragility of Life and the inevitable finality of Death. This type of art normally serves a purely moralizing purpose: In omnibus operibus tuis memorare novissima tua, et in aeternum non peccabis. In other words: be mindful of your actions because time is short and Eternity is unchanging and monolithic. Yet the very title of the set (and even the most cursory inspection of each piece’s subject matter), points to the contrarian image of Death itself undergoing the cycle of Life — that of birth, growth, demise and rebirth.

The philosopher Ludwig Wittgenstein once said that “Death is not an experience in life.” As such he ascribes it no meaning. He goes on to say that Death and its concept are absolutely empty mental constructs. In Philosophy, he says, when there is an object, there is also the concept of that object — for example there is an actual tree which can be differentiated from the concept of a “tree”. However, the concept of death is absolutely without any object. People cannot conceive it, except in the negative as an absence of Life. Moreover, as living beings, people are actually incapable of putting a truly subjective meaning to Death (since one actually needs to die to gain this subjective experience). Thus he says there is only the metaphorical meaning, and metaphor is the playground of artists like Javier.

She chooses to inform this vacant, still-born concept with her own view of Death as an integral part of the cycle of Life. This is her imperative and her duty as an artist (because perhaps, as Woody Allen once said: “The artist’s job is not to succumb to despair but to find an antidote for the emptiness of existence.”).

While much of Javier’s rich body of work dwells on gothic themes and of melancholia, there is much more to them than just images filled with stilled beauty and dark personal histories. Meditating on the mystery of Four Seasons, Four Ages, one may perhaps discover the truth that Javier has uncovered through her careful and deliberate process of creation — that the very remembrance of Death also serves, with much delicious irony, to intensify the quality of a person’s life, and that the prospect of Death is reason enough to embrace Life.