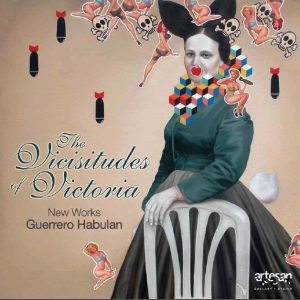 Romanian playwright Eugène Ionesco once said that “Realism, whether it be socialist or not, falls short of reality. It shrinks it, attenuates it, falsifies it…” He goes on to say that Social Realism is valid and authentic only if it incorporates imagination and dreams, both of which he also says are the fonts of truth in reality.

Guerrero Habulan’s own brand of Social Realism is very much steeped in imagination and dreams. He has developed a startling visual language that combines elements of the Victorian era — an age associated with cold, grey industrialization with their anti-thesis, modern pop-culture symbols that are the hallmark of a more liberal, more hedonistic age.

Four of the works, “Victoria” nos. 1 to 4, feature a gray-scale painting of Victoriana ornamented by 2-D isomorphic blocks from the classic arcade game Q*Bert. The object of Q*Bert is to jump on every cube to change its color in order to level up. There is no end game and the player keeps jumping until he or she gets tired and falls off. Habulan is perhaps challenging the viewer to consider how acceptance for women in power is a similar never-ending quest.

In another painting, “SheeBoom!” an image of Queen Victoria herself is decked out in ears and playboy bunny tail, surrounded by strange rain in the form of pin-up girls, skulls and bombs – the kind of artwork painted on bombers and fighter planes during World War II. There is a sticker of an apple (wisdom) pinned on her nose. Is Habulan saying that underneath the sturm und drang of a modern woman is a Victorian lady in hiding (or vice-versa)? Whichever the case, it is clear in the subtext that not recognizing this dichotomy will certainly lead to disaster.

Two other paintings deal with domestic servitude in some way. In “Directive” a woman dressed as if she was on the staff of Gosford Park controls a robot that is also dressed like a servant. It is a not-too-subtle reminder that technology cannot always liberate women from slavery. “Somewhere Over the Rainbow” is a visually complex work where a “little brown sister” is sitting like a little lap dog on her mistress, while her faceless master in Imperial military fatigues looks on. She sings a song of longing (the “Somewhere over the Rainbow” of the title) but only the family dog seems to listen. Around them an imaginary war rages, while above her head, the outline of an imaginary Y-Wing from Star Wars shoots down a paper airplane. All are metaphors for a simmering hidden conflict.

The last work “The Tea Part is Over” ostensibly shows a young girl playing with a doll house. On her head is a robotic Mickey Mouse in the style of the graffiti artist DJ DeadMau5 with another Y-Wing on its head. The spaceship’s twin cannon are blasting an image of strong man Eugen Sandow, known as the “Father of Modern Bodybuilding”. Sandow and the dollhouse represent perhaps the traditional home-maker role of that the girl is rebelling against — the future that she clearly does not agree with.

In all of his work Habulan mixes seemingly disparate symbolism very effectively to deliver his message of dissonance, his own contribution to the rich and evolving aesthetic of Social Realism.