This year went as well as it could for me, writing-wise, as I didn’t really expect to publish much. Last year’s novel is unfortunately still stuck at chapter 4 (I’ve decided to shelve it for a while). The short film based on “Big Enough for the Entire Universe” is still stuck in post-production, with the release date moved to mid-2016. Lastly, the publication dates of six new short stories were also moved from the end of 2015 to 2016.

Despite all of these setbacks there have been couple of highlights:

Best of all, my first children’s book, the Romeo Forbes Award-winning “Here be Dragons” was finally released in 24 August, 2015.  Thank you to Gigo and Canvas, Jon, Rhandee, Danny and everyone who was involved in it’s almost 3-year long production. 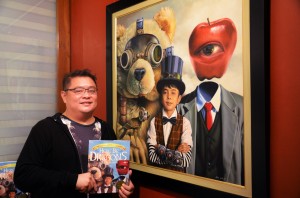 As usual there was not enough time to do all my writing projects. As a result, I have more work-in-progress stuff right now that I have ever had before — including three short stories, two flash pieces, a Line novelette, a Filipino translation and my second children’s book.

I mentioned earlier that the publication dates of six new short stories were delayed to this year. This means that I already have a substantial line-up coming for 2016 without having to do much.

Happy New Year to all my readers and thank you for all your support!