Twenty-Fourteen was a very stressful year, and as a result, my writing output was not what I’d wanted it to be.  The most significant event was a death in my family (which up to now I still cannot talk about for legal reasons).  I was very close to this person who died and the loss was very hard to bear. On top of family and work issues, 2014 also gave me my first experience being badly trolled. Since I’d already talked about that on another post, I won’t repeat it here.

Despite me being unable to write for months, my novel in limbo, and literally dozens of rejection letters, this the year wasn’t entirely lost for writing. In fact I am very thankful for what I had been blessed with. Let me share some of the highlights:

Somewhere along the way I also got to talk about Filipino and Singaporean Speculative Fiction on two panels at the World Science Fiction Convention (Loncon 3) last August. The first one was “The World at Worldcon: SF/F in South and South-East Asia” with Zen Cho, Rochita Loenen-Ruiz, Aishwarya Subramanian, and moderated by the always fantastic Mahvesh Murad.  The second was “Saving the World. All of It.” regarding how the concept of an Apocalypse is viewed by non-Western cinematic traditions with Aishwarya Subramanian, Engineer Yasser Bahjatt, Irena Raseta and Naomi Karmi. This time I got to be the moderator, my first time to do so at a con.

My family and I also got to hang out with fans, fellow writers and many SFF luminaries at the Hugo Awards ceremony. We even got to meet George RR Martin himself, as well as GOT show-runners D.B. Weiss and David Benioff — who graciously posed with us after winning their Hugo for “The Rains of Castamere”. 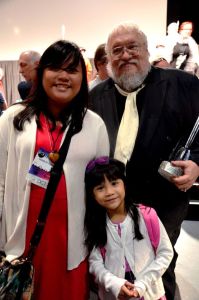 However the best part of 2014 was finally getting to meet many fellow authors in person, whether at Loncon, Nine Worlds or the various book launches I had attended. 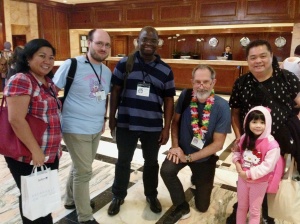 This year looks to be even busier as a result of the fall-out from 2014. My writing goal this year is simple – to resume writing my novel and to get at least two stories published. If I manage to do this, I’ll be a happy man.

Let me end this post with a bit of trivia. Many Filipinos ran around wishing family and friends “Manigong Bagong Taon” for 2015. Most assumed this greeting meant have  “a prosperous new year”.  However, strictly speaking, this isn’t correct. The root word for “Manigong” is the old Tagalog word “nigo”

which is synonymous with “asinta”, or in English ” to aim/to plan”. When we wish someone “Manigong Bagong Taon”  we are actually saying “May you achieve what you aim for this year“.  For me, this is a really wonderful thing to say.

Manigong Bagong Taon everyone! Thanks for reading.

Victor Fernando R. Ocampo is the author of the International Rubery Book Award shortlisted The Infinite Library and Other Stories (Math Paper Press, 2017 ; US edition: Gaudy Boy, 2021) and Here be Dragons (Canvas Press, 2015), which won the Romeo Forbes Children’s Story Award in 2012. His play-by-email interactive fiction piece “The Book of Red Shadows” debuted at the Singapore Writers Festival in 2020. His writing has appeared in many publications including Apex Magazine, Daily Science Fiction, Likhaan Journal, Strange Horizons, Philippines Graphic, Science Fiction World and The Quarterly Literature Review of Singapore, as well as anthologies like The Best New Singapore Short Stories, Fish Eats Lion: New Singaporean Speculative Fiction, LONTAR: The Journal of Southeast Asian Speculative Fiction, the Philippine Speculative Fiction series and Mapping New Stars: A Sourcebook on Philippine Speculative Fiction. He is a fellow at the Milford Science Fiction Writers’ Conference (UK) and the Cinemalaya Ricky Lee Film Scriptwriting Workshop, as well as a Jalan Besar writer-in-residence at Sing Lit Station (2020/2021). Visit his blog at vrocampo.com View all posts by Victor Fernando R. Ocampo